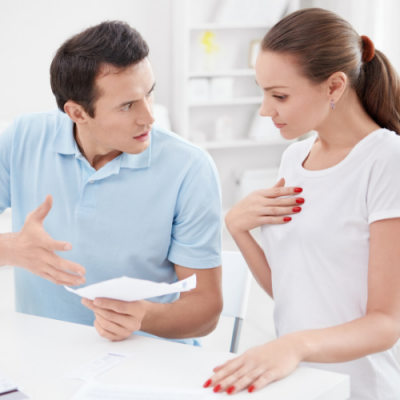 And Then The Fight Started.

When couples say “I Do,” they don’t always think about their financial compatibility. After all, love conquers everything… right?

According to a Money Magazine poll  70 percent of all couples fight about money more than snoring, household chores, togetherness or sex. Twenty-two percent of husbands and wives have spent money they didn’t want their partner to know about, and sixty percent check their bank accounts more frequently than they have sex.

Unfortunately, couples who fight about money an average of once a week are more than 30 percent likely to be destined for divorce. More research finds the frequency of money disputes remains the single best predictor of divorce.

Whoa!….What happened to “For  better or for worse?”

Here Are 5 Common Mistakes Couples Make That Can Poison Their Relationship.

1. Not talking about financial goals and plans can make bill paying time emotionally volatile. As unexpected bills mount up, and it’s time to pay the piper, it’s easy to criticize and blame each other for the mess.  Not taking time to discuss your financial goals and dreams leads to conflicts and financial challenges… and then the fight started.

2. Financial unfaithfulness and miscommunication, especially when sharing one  bank account. Few things will destroy trust in a marriage faster than lying about money. Keeping secrets, hiding credit cards, or just  forgetting to record checks, debits, and cash withdrawals leads to surprises when your card is denied due to insufficient funds. The embarrassment alone can escalate emotions… and then the fight started.

3. Excessive criticism of each other over their use of money.  According the the Money poll, “Four out of five spouses say they are on the same page about money. In truth there seems to be a large perception gap. They each think the other one is the spendthrift.”  Not recognizing the need for each person to have personal, discretionary spending money for their interests leads to blaming each other for the current money situation… and then the fight started.

4. Letting salary differences divide them. Sometimes the spouse bringing in the most money can feel entitled to the most say-so, even if this spouse is not the better money manager. That’s just asking for more money and relationship troubles… and then the fight started.

5. Not recognizing each other’s strengths.  Spouses think they are as good or better than the other at all aspects of managing money. More times than not, one spouse is a spender, and one is a saver. One is more disciplined or better at numbers than the other. Focusing on the negative aspects of this, rather than building on the positive, can lead to excessive criticism… and then the fight started.

What if you could replace the time and emotion you spend arguing over money issues with harmony working toward the same goals and the satisfaction of having money in the bank to cover all of your bills?

What if you could be financial soulmates, so to speak.  “Oh the Places You’ll Go,”  as Dr.Seuss says….. Happy places, that is.

Couples who work together as true financial partners have been shown to achieve greater financial success than single people.

Many couples don’t take the time to plan for their financial success, and they just keep repeating the same arguments and fights time after time never really solving the problem.

Or maybe, they just don’t know how to go about it.  High schools don’t teach Monday Management 101.  But help is on its way. Money management is a skill, and like any other skill, it can be learned.

Check-in next week for practical solutions to these and other money mistakes, that will get you on the road to financial harmony in the home.