TOUCH THE FACE OF GOD, LEARNING TO FLY 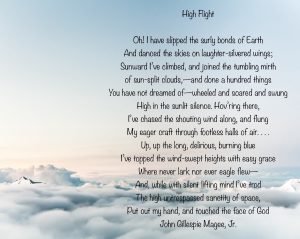 Did you know on the darkest, stormiest of days there is a bright sunny day on the other side of the clouds?   If you have flown commercially, you have probably seen this.   As a private pilot, I always enjoyed flying above the clouds where the sunshine was bright while a rain storm was raging below.  On gloomy days I always remind myself the sun is always shining even if it is sometimes obscured by a dark cloud hanging over.

Similar to the feeling one gets when flying above the clouds, there is a special beauty and serenity to flying at night with everything cloaked in darkness.  ‘Stars’ are twinkling not only above you, but also below you from illumination of the cities that never sleep.    Even with the comforting sound of the droning engine, the world is quiet.  There is a feeling of being alone while also a small but integral part of the universe.  You are in a happy place.

A Happy Place in the Sky

Becoming a pilot can open up a lot of opportunities for happy places, not to mention the boost of self-confidence you get by mastering a useful skill.  Reducing travel time allows for trips to the beach for lunch with friends and back home in one day.   A day trip to visit with relatives who live far away is possible.   And just flying around on a beautiful day with no destination in particular is an enjoyable experience.

Is one of your dreams to be a pilot?  It was never a dream of mine until one fateful day.  It was, however, a dream of my husband’s.  So one beautiful, sunny spring day I tagged along with him to check out a small airport about 30 minutes from our house where they were offering free demo flights and special flight instruction packages.  He had already been taking lessons at another airport further away and was looking for something closer.

While my husband was setting up his package, I took a demo flight in a Cessna 152.  This is a single engine, two-seater aircraft.  I was allowed to hold the yoke as we rolled down the runway.  Gathering speed, we rotated, (that’s pilot-speak for the moment the aircraft lifts off the ground) then leveled off to gain speed for a smooth climb-out as we “slipped the surly bonds of earth”.

We danced in the sky, my instructor maneuvering the plane into 180 degree circles, figure eights, and steep banks.  We even spiraled down like a corkscrew, deftly pulling out at the right moment for smooth recovery.    It was like riding all the rides at the fair on one ticket.  I was in heaven.

Any apprehensions I may have had about flying were gone as the instructor demonstrated power-on and power-off stalls.  A stall occurs when the smooth airflow around the wings is lost as turbulence flowing past the upper part of the wings destroys most of the lift.  Simply put, the airplane begins to fall, so to recover you drop the nose of the airplane to level out the angle of attack and regain flying speed and attitude.

Returning to the airport was a smooth and tranquil flight.  I was deep in thought as I felt I really could ‘put my hand out and touch the face of God’ as John Magee does in his poem ‘High Flight’.

On final approach we ‘slipped’ into a landing to clear some power lines close to the runway end and gently touched down.  I learned later, slips are a way of cross-controlling the aircraft to kill off altitude quickly when a high approach to a landing field is necessary.

I was hooked.  I regretted the demo flight was over and I wanted more of the same.

The rest is history.  After achieving my Private Pilot license, (and being the risk planner I am) I wanted to learn all I could about flying.  I went on to obtain an instrument rating that allows flying under instrument flight rules (IFR) using only the aircraft instruments when visibility is obscured

I was thankful I had an IFR rating when my daughter and I were flying one day and found ourselves in the middle of an un-forecasted thunderstorm.  With rain beating down on the windows and zero visibility, this could have been a fairly stressful event. But instead of “hours and hours of boredom with moments of sheer terror” as some pilots describe flying, this was for me “where preparation and opportunity meet”.   Using my IFR training, I radioed the control tower, was vectored into the airport, and made a safe landing.

You Too Can Learn to Fly

If your dream is to become a pilot there are different license categories and classes, but   ‘Airplane – single engine-land (SEL)’ is a good place to start.  Check out a local small airport first for qualified instructors.  Charges are usually by the hour, so if you train at a large airport, expect to spend more because of ground time spent waiting in the take-off and landing queues.  You will get more radio experience though at a large airport which will be good if you want to continue with an instrument rating.

If you’re thinking about flying, but need a little more information and inspiration, here are a few books you can read.  Just click on the link to find it on Amazon.